10/16/2018--Last week the Pittsburgh Foundation approved a $5000 grant to fund a pilot four podcasts in what I hope will become the Bends Toward Justice Podcast Series of 50 conversations with a variety of Americans about the teaching of Martin Luther King, Jr., that "the arc of the moral universe is long, but it bends toward justice. In my view, as readers of this blog know, American public life is in decline, and private life too, because of the decline of moral realism. These conversations represent an attempt to reintroduce justice and history as serious cultural categories.

The podcast series is a part of the Truth/Justice/Democracy Initiative intended to change American public life. Truth refers to the billboard in Erie, PA, this summer that focused on lying in politics. It announced that "tax cuts threaten social security." It was aimed at a particular lie--that tax cuts pay for themselves--but not only lying by one Party. I have Democratic Party lies, also, such as the we keep our doctors and plans under Obamacare, a claim President Obama undoubtedly believed at first, but kept repeating when he knew it was not going to be true.

The podcast series represents the justice part of the initiative.

The Democracy part has to do with all of my work recently about the looming threat to democracy. The immediate issue is partisanship that overshadows truth. That Republicans will not criticize President Trump about global warming. That Democrats will not acknowledge any good that President Trump is doing. My answer is the formation of a pro-democracy caucus among law professors promising to call out their own side. (Not much luck so far).

Here is the billboard and me in front of it. Photo by P. Ledewitz. 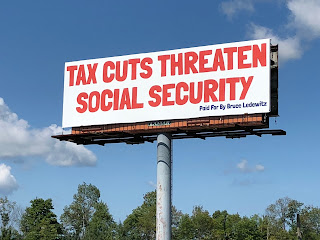 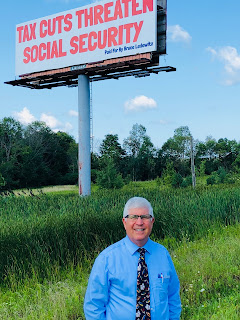 Posted by Bruce Ledewitz at 5:23 AM